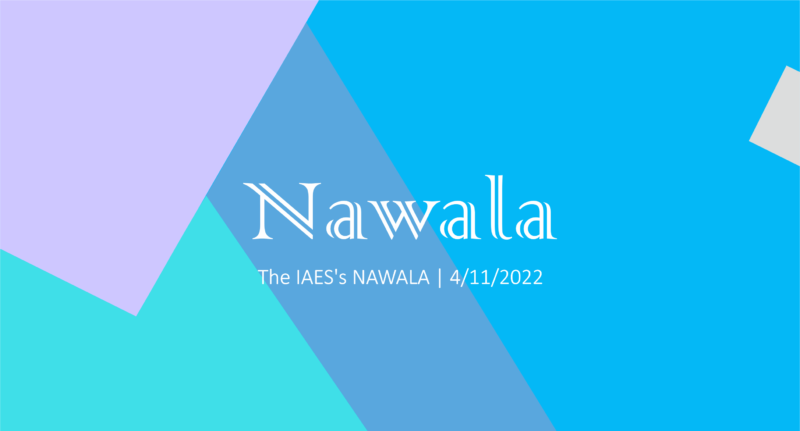 Greetings, colleagues Nawala! Hope you are always in good health. This is the IAES’s Nawala of the Institute of Advanced Engineering and Science. Today we want to share with you how smartphones play a role in facilitating human activities.

Smartphones can effectively help human activities with an integrated connection or internet network to communicate and access a website. High-speed internet networks are developing from 2G to 3G, which is currently the most common 4G as well as the latest development of 5G networks. You can get a full picture of the internet network above by reading the research review by Iqbal et al.

The use of mobile communication is growing radically with every passing year. The new reality is the fifth generation (5G) of mobile communication technology. 5G requires expensive infrastructural adjustment and upgradation. Currently, Pakistan has one of the most significant numbers of biometrically verified mobile users. However, at the same time, the country lags incredibly in the field of mobile internet adoption, with just half of the mobile device owners avail broadband subscription. It is a viable market with a large segment yet to be tapped. With the advancing progression in Pakistan towards the internet of things (IoT) connectivity, i.e., solar-powered home solutions, smart city projects, and on-board diagnostics (OBD), the urgency for speed, bandwidth and reliability are on the rise. In this paper, Pakistan’s prevalent mobile communication networks, i.e., second, third and fourth generation (2G, 3G and 4G), were analyzed and examined in light of the country’s demographics and challenges. The future of 5G in Pakistan was also discussed. The study revealed that non-infrastructural barriers influence the low adoption rate, which is the main reason behind the spectrum utilization gap, i.e., the use of 3G, and the 4G spectrum is minimal.

In addition to communicating, smartphones have an operating system that can be installed in the devices. Mobile applications are different from desktop applications. Like the research of Ariff et al., they developed a mobile-based fitness mentoring application. More details related to the development of this application can be seen at:

For smartphone users, nowadays you must hear Near-field communication (NFC) very often. NFC is known as a payment technology with digital money directly on its smartphone. Curran et al. introduced NFC in their research as follows:

Near Field Communication (NFC) is a technology that enables a device to communicate with another at a maximum distance of around 20cm or less. Currently, mobile phone manufacturers, banking institutions and mobile network providers are attempting to apply this technology to Smartphones and other handheld devices because of the opportunity to enable the consumer to use commercial services more easily. This paper discusses the expected increase in mobile payments using Near Field Communication, possible uses and the risks associated with carrying out transactions over a wireless network. We also discuss a real world implementation of an NFC based loyalty card system for retail.

So rapidly the development of smartphone technology can accelerate and facilitate human activities, including financial transactions, Sangulagi et al. utilize NFC technology as a method to make it easier to order food at a restaurant. How is the mechanism in more detail?

Mobile apps of various kinds continue to emerge as smartphones become more popular and mobile telecommunication matures. NFC is the most common wireless technology used in smartphones presently. It is used in mobile devices having built-in NFC to allow consumers to input payments, receive messages, and do nearer device recognition, among other things. The paper proposes the NFC technology-based food ordering system for all the customers who want to have food at their residence only. The results show that the application works properly in finding the nearby restaurants and completing the food order without any hustle.

Implementation of NFC Technology was developed to facilitate instant payment transaction such as purchase tickets, goods, or service to become one of the digital wallet besides to using credit cards. The high rate of mobile devices usage in Indonesia make many companies take advantage of this device as a media in electronic payment transactions, a lot of banking and financial product in Indonesia used this technology such as E-money, T-cash, Flazz, Ooredoo, Dompetku, XL-Tunaiku, Doku Wallet, Skye card, Artajasa MYNT and many more. The technique that used in this research to prove the hypotheses was Structural Equation Model (SEM) using Smart PLS software, we will used questionnaire and literature review method to found trend of NFC use. The population from which to draw conclusion was defined as all individual capable use NFC Technology for payment transaction .In this study, we will investigate NFC use in Indonesia, The proposed research model was develop by TAM Framework with some dimension from NFC study iterature that is Mobile Payment Knowledge, Technology, Trust, Behaviour and Compatibility into the model, in order to determine the significant factor that influence of NFC use in Indonesia.